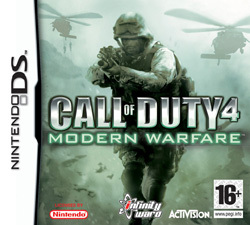 The signature Call of Duty chaos of battle is coming to Nintendo DS for the first time in a modern day first-person action experience packed with intense sights, sounds and gameplay.

Call of Duty 4: Modern Warfare for the Nintendo DS delivers an arsenal of modern weaponry, arming gamers with precision controls and touch screen capabilities for battle across the world’s most dangerous hotspots. In an unfolding story that parallels the epic, high-octane PC and next generation console Call of Duty 4: Modern Warfare, the Nintendo DS title enlists players as U.S. and coalition forces against a rogue enemy, where the action rages from land to the skies in all-out combat that threatens the world.