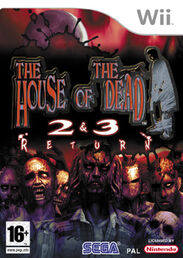 THE HOUSE OF THE DEAD franchise is famous for its heart-pounding pace, astounding visual details and vast armies of unique enemies. Blasting through legions of grotesque zombies and mutated monsters, players eventually face-off against mammoth boss creatures that will test the accuracy and skill of every Wii gamer.

Both THE HOUSE OF THE DEAD 2 and THE HOUSE OF THE DEAD III will feature the original arcade experience, complete with branching storylines, over six ghoul-filled game modes and bonus content. Re-live your glory days in the arcades and mow down packs of clawing, biting undead with the new rapid-fire Wii Zapper! Utilizing the innovative new Wii Zapper or the Wii Remote and Nunchuk, players will experience branching storylines with over six game modes including Arcade Mode and Time Attack modes that will test their shooting skills.

THE HOUSE OF THE DEAD 2 & 3 RETURN features an engaging single-player campaign, plus a co-op multiplayer mode for up to two players for countless hours of zombie shooting action.

* Experience the popular arcade shooting action at home. Blast the undead with the quick trigger action of the Wii Zapper.
* Co-op gameplay. Grab a friend and destroy the undead together including Arcade mode and Time Attack mode.
* Gory arcade graphics. THE HOUSE OF THE DEAD 2 & 3 RETURN retains the rich arcade graphics you love. 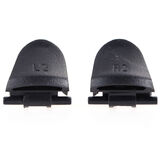