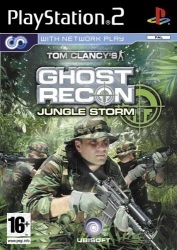 A brand new game from the popular Tom Clancy’s Ghost Recon series – exclusively for the Playstation®2. Developed with PlayStation2 players in mind, Tom Clancy’s Ghost Recon: Jungle StormTM will fully exploit the capabilities of the platform with features such as the wildly popular voice command, and voice chat systems plus online statistics tracking and ladder ranking. Most importantly, this game will mark the first time that PlayStation2 fans can take their great ghost action online and learn firsthand why action-packed online game play quickly established Tom Clancy’s Ghost Recon as the most popularly played game on the Xbox LIVE online game service. Havana, 2009: Deep in the sweltering jungles of Cuba, an insidious revolution is brewing. Led by a drug-funded warlord, its aim is to take advantage of the post-Castro power vacuum and seize control of the island republic. Enter the Ghosts, the elite team of U.S. Army Green Berets. Sent to Cuba as part of a UN peacekeeping force, their mission is to destroy the warlord and his mercenary forces, and secure the elections for a free Cuba. Bogotá, a few months later… While the Cubans revel in their newfound democracy, the Colombian drug cartel that financed the failed revolution has set its sites on a new target. Readying a retaliatory blow against its own American-allied government, the Columbian cartel rocks the capital with severe explosions, including one that severely damages the American embassy. Hearing the Colombian government’s cry for support, the U.S. sends in the Ghosts to deliver deadly justice to the Colombian cartel and end their ever-accelerating agenda of terror. Game Features: The first ever online Ghost Recon experience for the PlayStation 2. 31 multiplayer maps. 3 new multiplayer modes, for a total of 10 (tentative). Online statistics tracking and ladder ranking. Direct your multiplayer squadmates with full voice chat capabilities. Full support for voice commands via the Sony PlayStation 2.