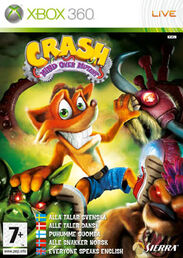 
In Crash Bandicoot: Mind over Mutant, a rejuvenated Neo Cortex is taking over the world one brain at a time! Cortex and N. Brio devise a new kind of evil; a text-messaging, do-anything device which controls both mutant and bandicoot minds. Armed with his quick-wits and lightening agility, Crash must free his friends, the titans and save the day!