LOADS OF VIRTUAL REALITY FUN AT A GREAT PRICE POINT!
Drunkn Bar Fight lets you throw bottles, darts, chairs, fire extinguishers and anything else you can get your hands on at opponents. 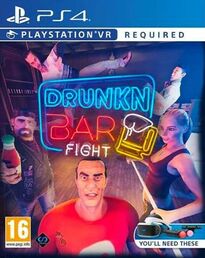 Drunkn Bar Fight is one of the most talked-about and watched games on YouTube in VR, with YouTubers praising its hilarious style.
Throw punches, bottles, darts, chairs, tip jars or anything else you can get your hands on at opponents.
Enjoy performing socially unacceptable behaviour without the resulting obligatory visits to the hospital, jail and courts. The only limits to the mayhem is your imagination and your moral decency.
Play in single player or with a friend in CO-OP.

Features
• Brawl your way out of 4 locations, grabbing more than 30 different objects as weapons.
• Online COOP – join with a friend in multiplayer and go through each level together.
• CO-OP Offline Multiplayer- up to three friends can join your game with DualShock controllers.
• All the mechanics for a great fight – punch, kick, use Objects in the environment such as chairs, stools, glasses (even create novel interactions, such as my mixing fireworks with lit candles),throw items such as darts and bottles and block attacks.
• Some of the drinks in the bar are “Magic Potions” that glow to distinguish them. Grow, shrink, gain additional strength and slow enemies down.
• Change the music on the Jukebox.
• Unlocks extra weapons and find some of the many hidden discoverables.