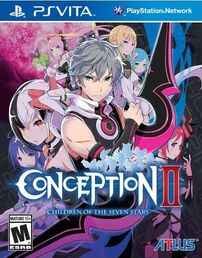 In Conception II, players take on the role of a young man beginning his training as a Disciple – a human gifted with the divine powers of one of the Star Gods, and one of the few who can fight the monsters that plague the world. These monsters emanate from the Pandora Labyrinth, which births these abominations at a prodigious rate. Worse yet, the Pandora Labyrinth is beginning to spawn labyrinths of its own, so it’s up to the Disciples to put an end to it. And even worse than that, a Star God’s power only resides within a human until the age of 18 and the need for new Disciples is at an all-time high. Meaning Disciples will have to combine their powers to “create” Star Children who can fight for them in battle. Let’s put it this way… it brings a new meaning to the phrase “after-school activities.”