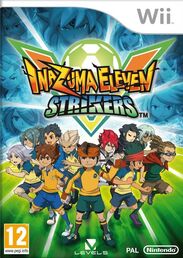 Spectacular Special Moves and instant action combine to create a totally new kind of football experience in Inazuma Eleven Strikers on Wii. Get ready for the beautiful game as you’ve never seen it before – this is battle football!

Step into the boots of Mark Evans, Axel Blaze and other familiar characters and use their spectacular skills to bamboozle your opponents. From the epic Almighty Cannon to the immense Wyvern Crash, more than 200 Special Moves ignite the beautiful game with vibrant animations that transport you into the world of the anime series!

A range of gameplay modes offer plenty of exhilarating football action for up to four local players on one Wii console. Rather than the RPG-style gameplay of the Nintendo DS games, the focus is firmly on non-stop action in Inazuma Eleven Strikers. With just one Wii Remote each you can settle long-running rivalries – or start new ones! – in a knock-out tournament or one-off exhibition match. Divide your players into 2 vs. 2, 3 vs. 1 or 4 vs. a computer-controlled team and see who’s the ultimate football champ!

Club Room mode takes you back to the beginning of the Raimon team’s adventure for 12 of their most famous matches, taken straight from the anime. Each victory brings you closer to ultimate glory, boosting your players’ capabilities and letting you scout new talent too, with over 150 characters to discover and recruit. Keep improving your squad and you can defeat even the toughest teams!

Not only do you have the on-pitch action, but you can take your team to the training area to work on their skills and strengthen their friendship bonds in a range of enjoyable minigames. Up to four players can work together in quick-fire events like the Tyre Punch.