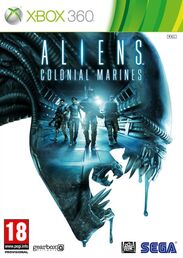 A squad-based first person shooter set just after the events of Alien 3, you must pull on the virtual boots of another squad of marines as you investigate what happened to Ellen Ripley and the original team from the movies. You can switch between any squad member whenever you want, each with a different speciality or weapon.

* Close encounters: Cinema’s original space marines are back in business with an intense squad-based shooter from the makers of Brothers in Arms and Borderlands.

* Unknown organism: Battle against cinema’s most iconic aliens with facehugger, scout, warrior and queen varieties, plus never before seen types such as the drone.

* Movie backdrop: Fight through locations from the first three films, including the derelict space jockey ship, the colonist base of LV-426 and the Fiorina “Fury” 161 prison facility.

* Game over, man: Play in the online and offline co-operative mode or compete competitively in special multiplayer modes in free-for-all and team matches.

n Aliens: Colonial Marines, players are part of a United States Colonial Marine squad and must prepare to face an Aliens assault more intense and horrific than ever before. Players must destroy the enemy with classic Aliens weaponry ranging from pulse rifles to flamethrowers as well as brand-new equipment.

Aliens: Colonial Marines features a story driven single-player mode and a four player co-op mode allowing players to share the chilling experience with three friends. In co-op mode, each player assumes the persona of a United States Colonial Marine and have a distinct role to play in the completion of every mission.